What does ADU stand for?

ADU is an acronym for Accessory Dwelling Unit.

What is an Accessory Dwelling Unit?

An Accessory Dwelling Unit is an additional residential dwelling on the same parcel as a single-family dwelling which provides complete independent living facilities for one or more persons. This additional housing includes permanent provisions for living, sleeping, eating, cooking, and sanitation, built either within or adjacent to the main house. Other common names for an accessory dwelling unit include mother in law apartment, granny flat, cottage home, studio shed, and just plain old backyard home.

Where can you build an Accessory Dwelling Unit?

Accessory Dwelling Units are most commonly built on single family home properties but in some  cases may be built in unused spaces within multifamily buildings.

What are the basic types of space in an ADU?

Accessory Dwelling Units are required to have three specific types of space, a space for sleeping, a space for cooking, and a toilet/washroom. 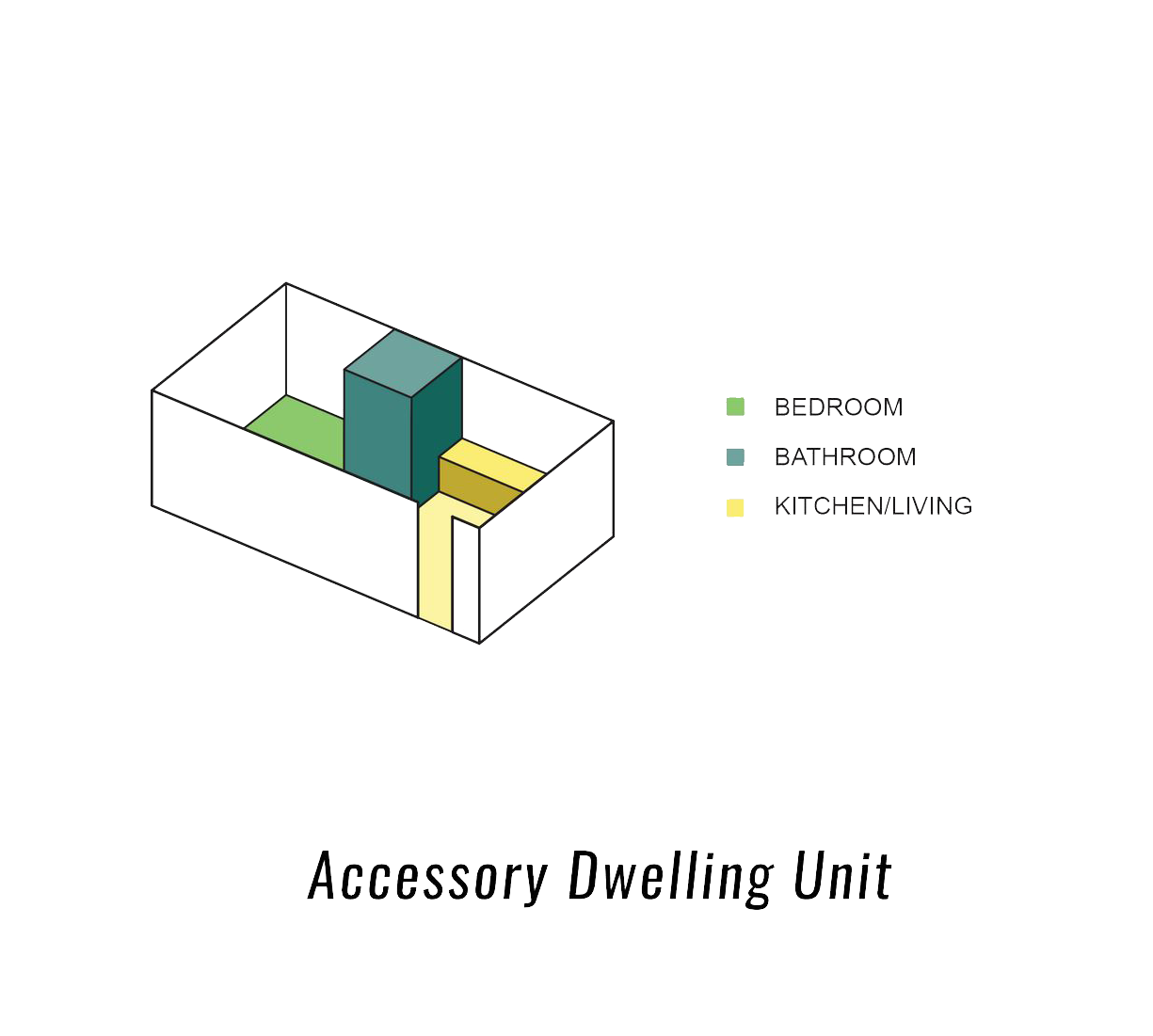 What are different ADU Types?

Accessory Dwelling Units can be built in three main configurations on a single family home lot.

‍Here are the ADU Types:

Build a new ADU attached to and accessible directly from your existing home.

What is the difference between an ADU and a AADU?

On top of adding square footage to your home as a home addition would, an accessory dwelling unit addition, also called an Attached Accessory Dwelling Unit or AADU, also creates the flexibility for occupants to keep the ADU open to the main home, or close it off for other people to privately live in. An attached accessory dwelling unit typically shares a wall with the main home.

Build a new ADU in your backyard separate from your existing home.

What is the difference between an ADU and a DADU?

Commonly referred to as a granny flat, in law unit, or studio shed, a DADU is a detached accessory dwelling unit and is separated from the main house. Instead of being adjacent to the main home like an AADU or within the main house like an JADU, a DADU will be an additional small home on the same property.

Build a new ADU within the walls of your existing home.

What is the difference between an ADU and a JADU?

If expanding a home or building a new detached structure are not viable options, it is possible to remodel space inside an existing home to add an accessory dwelling unit, also called a Junior Accessory Dwelling Unit or JADU.

What are the parking requirements when building an ADU?

No Parking is Required if one of the following is TRUE: (1) Your property is located with 1/2 mile of transit. (2) Your home is located with a historic district. (3) You are located within 1 block of a car share. (4) The ADU is a Junior ADU (JADU) and is a part of the main home.

How are utilities connected to an ADU?

Connections for water, gas, and electrical can be branched from the main home and use the same existing meter. Owners who plan to rent their ADU may request new, separate utility service, although this is not common due to the cost and timing impact involved with new service installations.

Will utility services need to be upgraded? In most cases the added capacity of an ADU does not exceed the capacity threshold for an existing gas or water meter. If the main home water or gas meter is very old, the added capacity from the ADU may require an upgrade.

Always make sure to reach out to your public utility provider early in the planning phase of your project. Connection for sewer is typically tied into the existing main home sewer at or near the front property line. Planning the pathway for getting utility lines out to the ADU, and sizing utility lines accordingly is a super important planning exercise and should be done early in the planning process. Always call 811 before you dig. 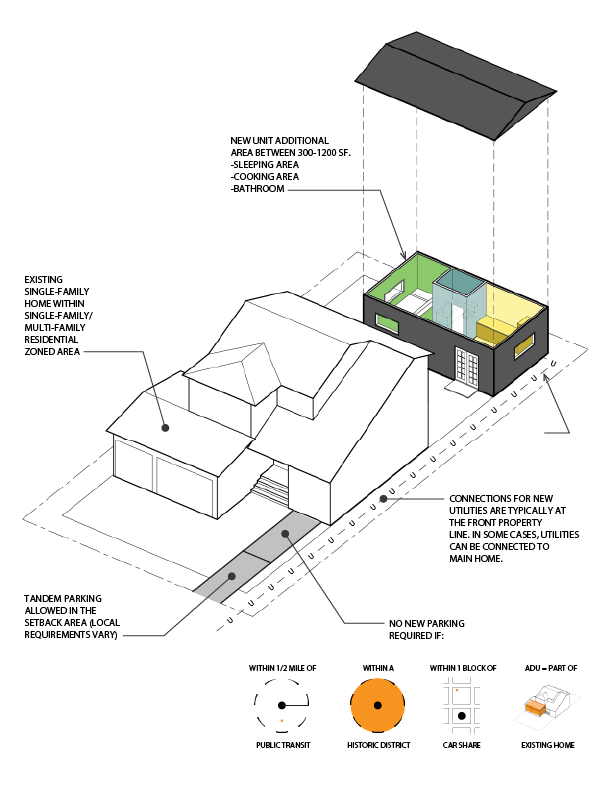 How is an ADU project different from home renovation, home remodeling, or home addition?

The main difference with an ADU home improvement project is that the type of new space provides a fully independent home for renters or family to live in. To be considered an “accessory dwelling unit”, this new space must have a separate entrance from the main house and include provisions for living, sleeping, eating, cooking, and sanitation. To meet these requirements, new kitchen and bathroom infrastructure will need to be considered as a part of as ADU project’s scope of work. ADU’s may be added by home remodeling, home addition, or as a completely separate detached structure. In California, ADU projects are required by law to have a streamlined path through local planning departments making ADU permitting easier than other project types.

What are the differences between home renovation, home remodeling, and home addition?

What can I do with an Accessory Dwelling Unit on my property?

An accessory dwelling unit could be a room addition separate from your house which you could rent to others. It can be an in law unit, and provide space for additional family to live in. It could also serve as a backyard studio, creating a dedicated space for your work or hobbies at home. Essentially, an ADU provides space for you to take more advantage of the property you own and use it as a source of passive income.

Building an ADU can positively impact these areas of your life

Excellent! You are one step closer to creating a better future!

Oops! Something went wrong while submitting the form :(